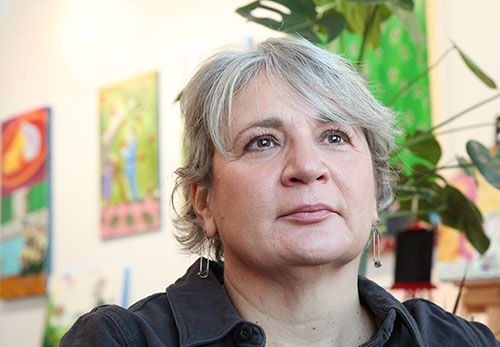 For decades, Tina worked as an interior designer.

Text and Photos by Nancy A. Ruhling

Tina Maria Glavan takes a small, white vessel from the shelf in her art studio and cradles it in her hands.

Exquisitely textured, it looks like a hollowed-out snowball, the kind Hostess, not God, makes.

It didn’t turn out as she envisioned. 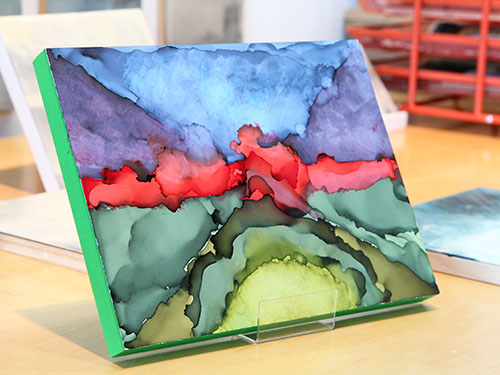 One of Tina’s colorful works.

It took her a while to see its real beauty; today, she wouldn’t part with it for any amount of money.

She could say the same about her new life.

For nearly 30 years, until she was laid off during the pandemic, Tina earned her living as an interior designer working in the firms of architects. 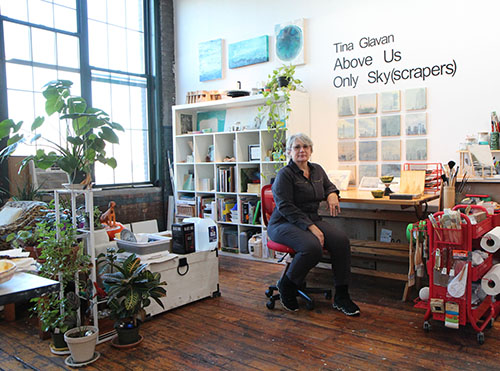 Tina’s studio is in the Silks Building.

If you didn’t know that about her, all you have to do is look at her shared studio in Long Island City’s Silks Building: It is artfully arranged by color and looks more like a living room than a place to paint.

But even the interior design part of her career wasn’t planned.

Tina, the middle of three sisters, was born in Woodside, which is where her parents settled and bought a two-family house after they immigrated from Croatia.

Her family lived in one apartment, her grandparents lived in another, and for a while, her three artistic uncles shared the finished basement.

“I always had a lot of babysitters,” she says, laughing. “When my uncles left, one of them left his drawing table with us until he got settled in his new place. He told me I could use it.”

He made the offer, most likely, because he had seen some of her drawings. 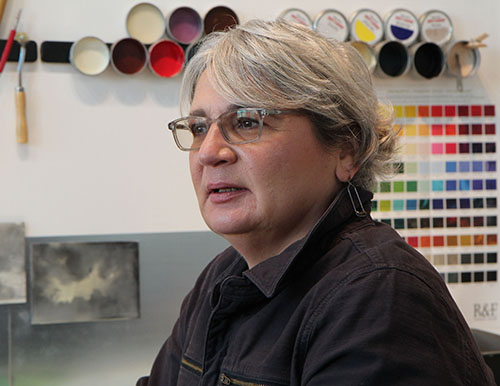 At that point in her life, Tina was interested in art and dance, specifically ballet, which she had started when she was 4.

“I was always torn between the two,” she says, adding that she spent her summers working for her father, a contractor, and helped design her own room when she was 15 and her family bought a house in Astoria.

By the time she was in high school, she started getting serious about modern dance, “but art was still my first passion,” she says. 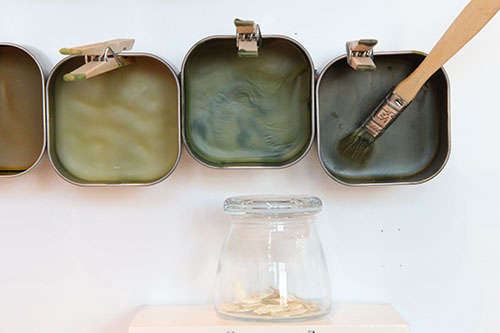 Tina displays her paints on the walls like art.

That’s why she got a degree in graphic design from Parsons.

For a while, a very short while, that satisfied her creativity.

When she was laid off from her straight-from-college job and trying to navigate the freelance playing field, a friend persuaded her to take an interior design class. 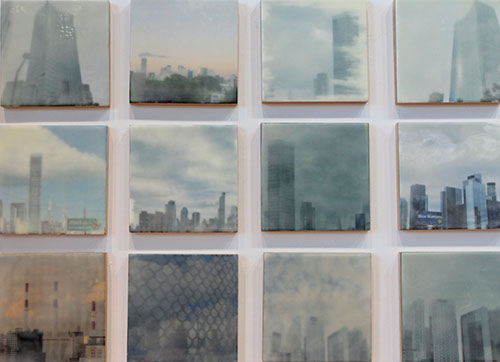 Some of her works feature photographic images.

She liked it so much that she earned a degree from the New York School of Interior Design, and for the last 15 years worked as a senior interior designer in a firm that specialized in luxury residential projects.

It wasn’t quite as creative as she envisioned – there is a lot of administrative paperwork in the trade – so she began making her own art on her own time. 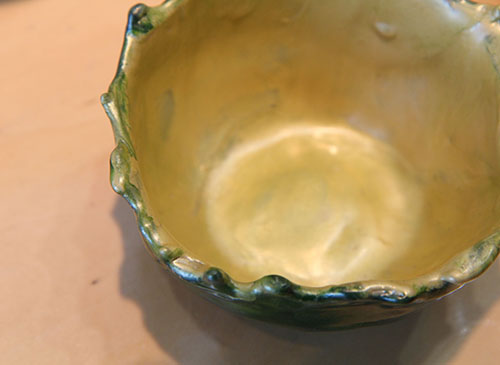 A detail of a vessel.

In 2012, after visiting an exhibit at an art museum, she became fascinated with the ancient art of encaustics, which essentially is hot-wax painting, and decided to focus on it.

“What really caught me was the luminosity and different textures,” she says. “And it can be used in myriad ways.”

To create her works, which are executed on wooden panels, Tina, clad in a black Rosie the Riveter jumpsuit, melts beeswax with crystallized tree resin she has pulverized then adds powdered pigments, some of which she mixes herself. 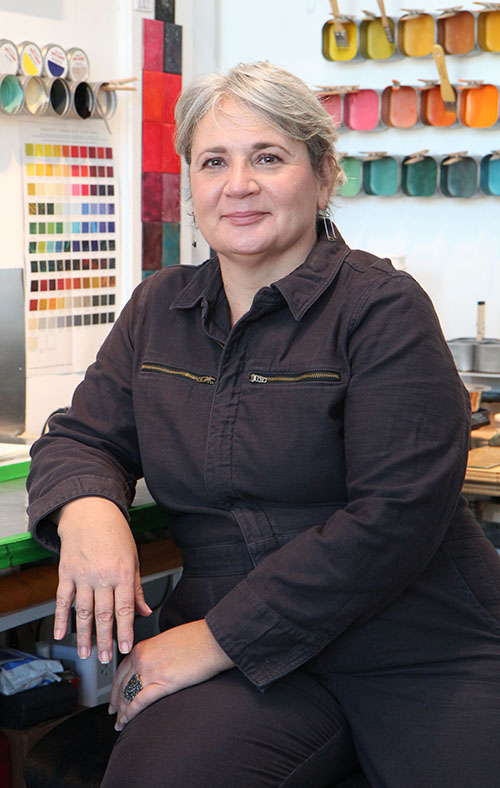 Tina became a full-time artist during the pandemic.

She heats the mixture on a pancake griddle until it reaches it melting point — 160 to 200 degrees.

She then applies it to the wood panel with a brush and fuses it with a heat gun or a torch. 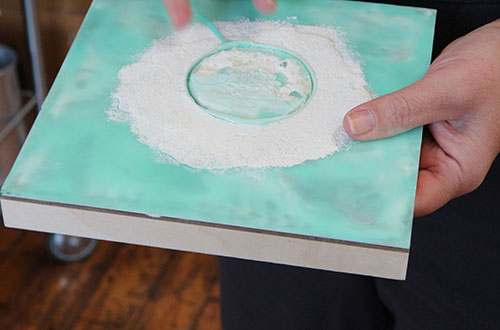 Tina’s works have texture and depth.

“The technique,” she explains, “can be one of unpredictability; you’re painting with fire and although you’re guiding the flame, it has a power of its own.” 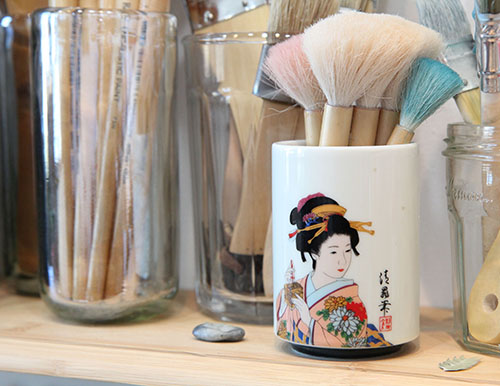 Since the pandemic, Tina has been working in her studio four to five times a week, generally in four- to five-hour stints.

Her work is time intensive – it can take up to two hours for the wax to melt.

“I was going to do painting as a hobby when I retired,” she says. “So I’m doing it now in my forced retirement.”

OK, she didn’t plan this transition, but like the wax in her works, she’s letting things flow. 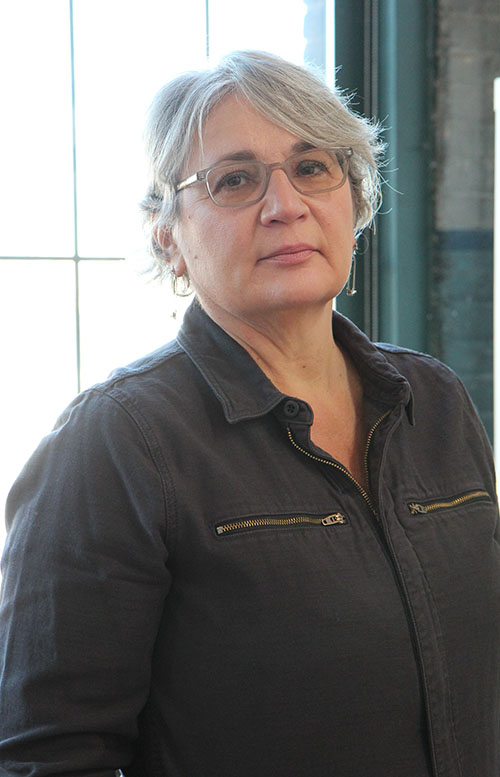 Tina’s devoting herself to making art.

“I’m so much happier now,” she says. “In life, we have to learn to make adjustments. I really want to make this work.”

She puts the white vessel back on the shelf.

It is a reminder, she says, of how things that go wrong can be so right.

Copyright 2022 by Nancy A. Ruhling