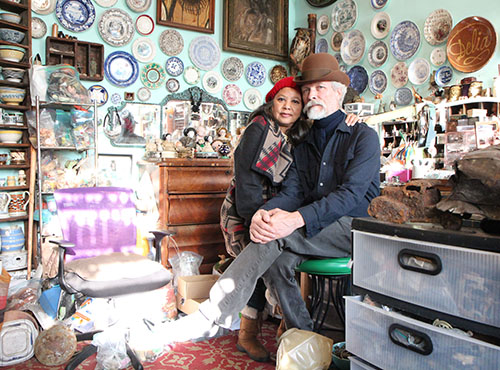 Belle and Scott in the workroom of their apartment.

Text and Photos by Nancy A. Ruhling

There are a lot of old things in the apartment Scott Jordan and Belle Costes share.

Virtually every inch of the tiny two-bedroom, fourth-floor walkup is covered with treasures they literally have unearthed while digging up the city’s past.

Actually, it’s really not totally accurate to say that there are two bedrooms, because the objects that live in the apartment have taken up so much room that there’s only one small space with a mattress on the floor that’s dedicated to sleeping.

In one room alone, there are a framed box devoted to children’s glass marbles; a shelf filled with antique ceramic bowls and mugs that runs from floor to ceiling; and plates and shards of pottery and ancient fragments of objects that Scott turns into art pieces and Belle transforms into jewelry. 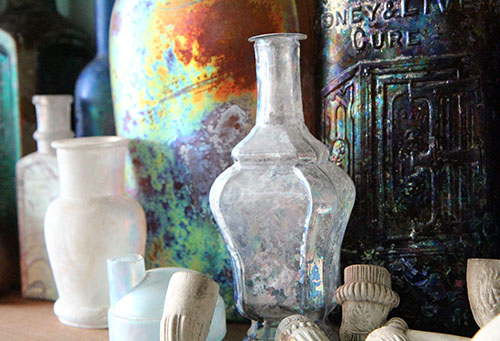 In the living room, there’s a big, aged wooden crate stuffed with stuff they sell on Etsy and at flea markets; in the kitchen, the cabinets contain collectibles.

Scott notes that the apartment “is like a tight-packed ship with secret storage spots.”

There is a lot to see, but it’s the colored bottles that you notice first. 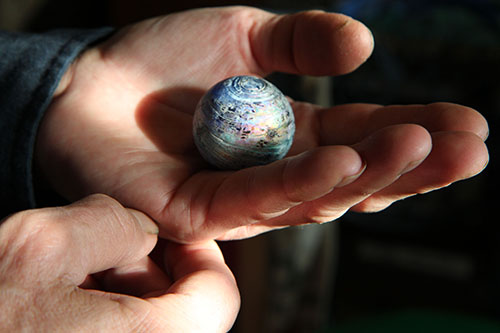 One of Scott’s favorite glass marbles.

When the sunlight streams through the windows, they produce a rainbow that transcends time.

Each object in their collection comes not only with a history but also with a story.

Scott, aka The Bottle Guy, reaches for a small piece of amethyst glass and cradles it lovingly in his hand. 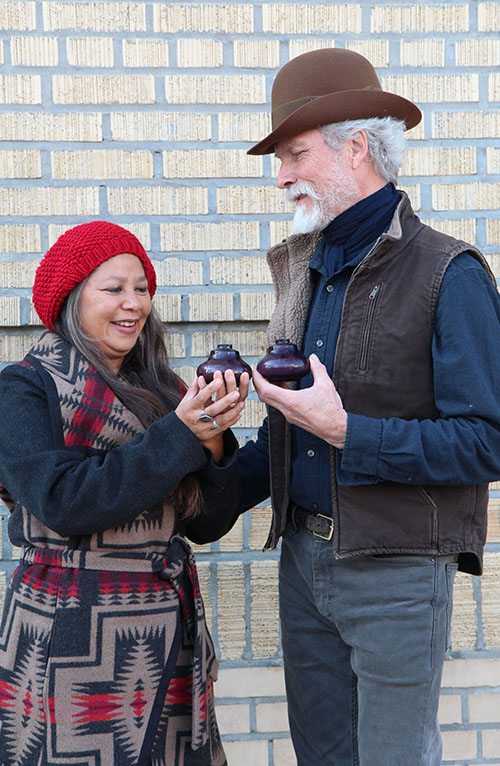 Belle and Scott with their matching oil-lamp bases.

It is, he says, one of his favorite finds.

Belle walks to the other window and takes down an identical piece. 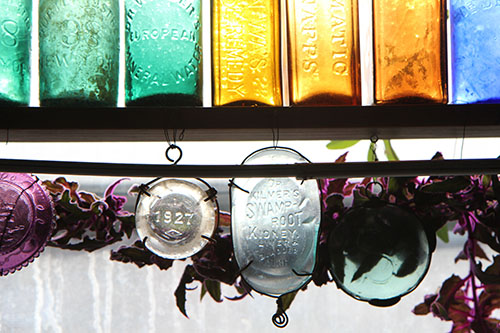 The bottles bring a rainbow of color into the room.

Each is adorned with stars and the opening words to the 19th-century English lullaby “Twinkle, Twinkle Little Star.”

Scott, a tall man with an old-fashioned silver mustache and beard, a vintage brown bowler and a neck scarf, found his little lamp in the 1990s in a Hoboken, New Jersey landfill; Belle dug hers up in a dump in the Bronx about six months after they became a couple.

“I had always admired his,” she says. “When I saw a little bit of purple three feet below the ground, my heart started beating fast.” 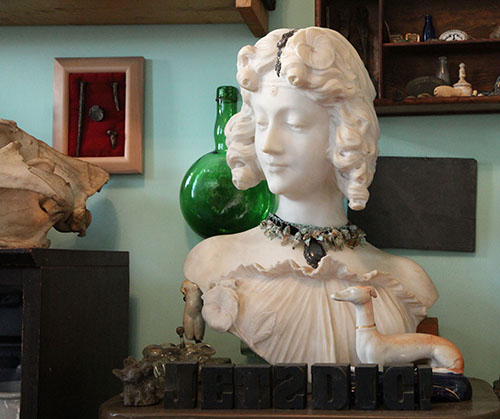 Scott saved this marble bust from the trash collector.

Fast, but not as fast as it did when she fell for Scott.

Scott and Belle, history lovers, are passionate about talking about the past, especially their own.

Belle, whose signature is a black top hat, was born in the Philippines and came to America when she was 13. She grew up in Jersey City.

At 18, she moved to Manhattan, where she got a job as a superintendent of a building.

After she befriended a woman on the street who was selling jewelry, she began making pieces and selling them at flea markets.

Scott, too, had moved around a bit. Born in Key West, Florida, he lived in Alaska and Connecticut then Governors Island, places his Coast Guard father was transferred to. 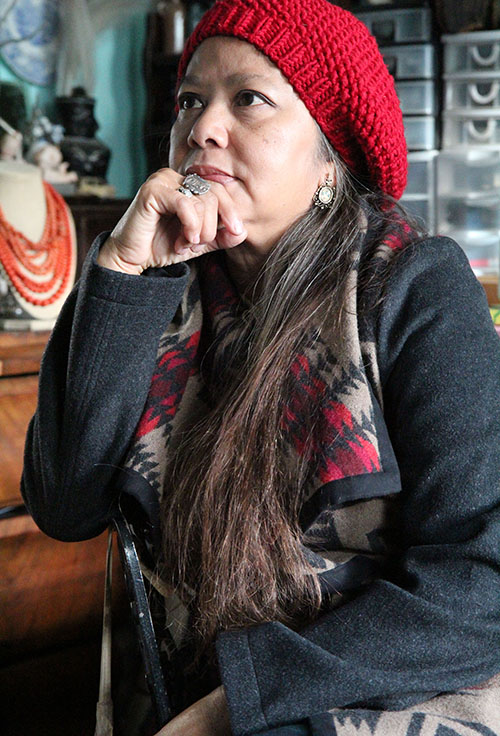 New York, at least in the beginning, was not his thing.

“I was used to playing in the Connecticut woods all day,” he says. “I knew I’d never be a city kid.”

He was, indeed, quite miserable until he met some teenagers who were digging up artifacts. 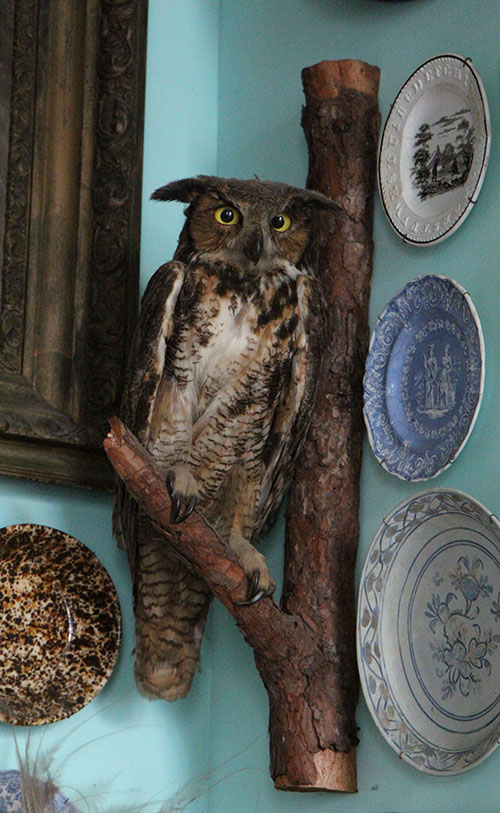 The walls are decorated with plates.

The things he found — old musket balls, coins and bottles — “made history explode for me. I started digging, and I’ve never really stopped,” he says.

Once he moved to Manhattan, he continued his excavations, mostly clandestinely at construction sites under the cover of darkness and the threat of arrest.

“When you break the earth open, you can smell the roots,” he says, adding that these days he digs at construction sites, landfills, cistern wells and privies, spots that he has asked permission to explore. “You are seeing time go back through the layers. It’s like a kid opening a Christmas present.” 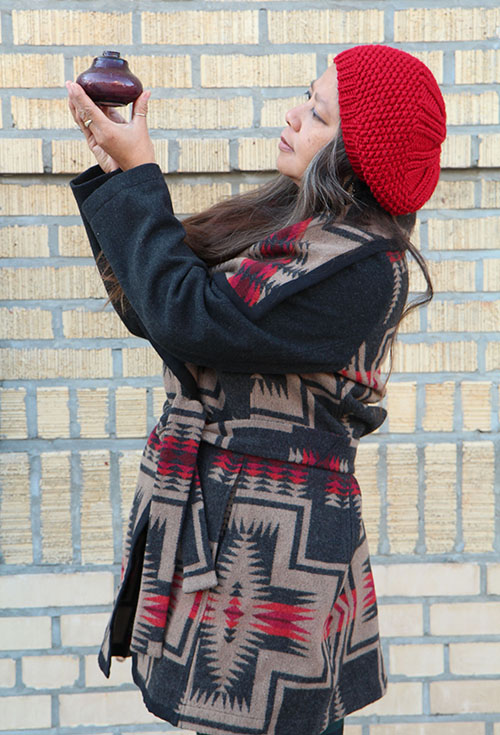 Belle admires her ‘Twinkle’ lamp base.

Although Scott had a variety of jobs – he’s been a maintenance man for a building, a dishwasher, an apartment cleaner and a deli worker – he never stopped digging.

For decades, he has made his living selling his finds, some of which he has turned into art collages or arranged in shadow boxes.

Eventually, he became a regular at what is now called the Grand Bazaar NYC flea market on the Upper West Side. 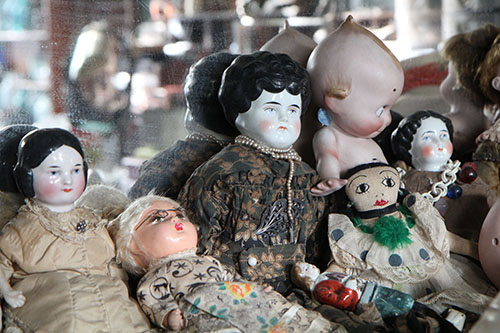 Several years later, Belle took a booth at the same fair to sell her jewelry.

“I always had a crush on her,” Scott confides. “I never told her because I was in another relationship, and she was married. I watched her daughter grow up. The hello hug I gave her each time I saw her had to last me the entire week.” 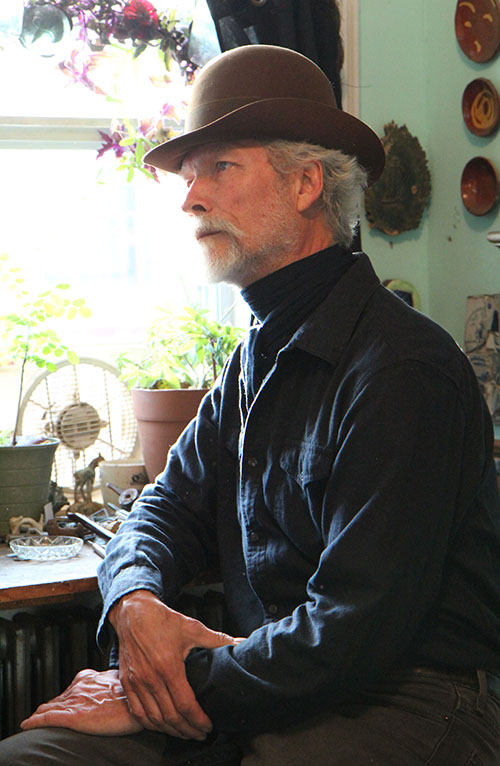 Scott, aka The Bottle Guy.

Adds Belle, “I considered him a friend; I don’t know why he never asked me to go digging with him.”

The answer, Scott says, is simple: “You had a husband.” 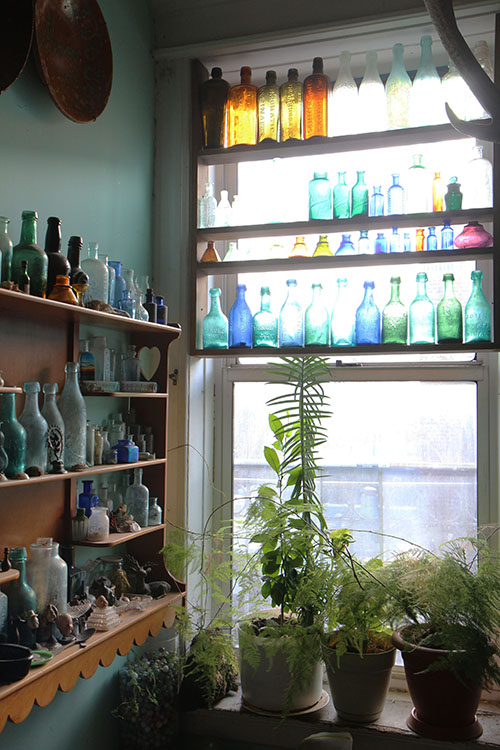 A rainbow in the window.

Anyway, as Belle’s marriage ended, and Scott announced that he was quitting the flea market, their relationship changed.

“I wanted him to stay,” she says. “The Saturday night before he was leaving, I had a dream about him – it was romantic and sexy – and I had a debate with myself about whether to tell him.”

When she told him she dreamed of him but couldn’t divulge the contents because they were too personal, he asked her out to lunch.

“We discussed everything but the dream,” she says, adding that she did reveal the racy details, but it wasn’t until much later. 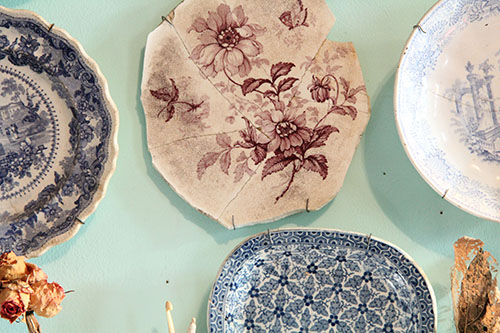 Scott wasn’t surprised – “these were the thoughts I was sending her all those years.”

It turns out that Belle loves digging as much as Scott does.

“Growing up, I was a tomboy,” she says. “I used to climb trees, and my grandpa, who was a miner, taught me to sharpen a pencil with a machete.”

To which Scott dryly adds, “In America, we do that with a knife.” 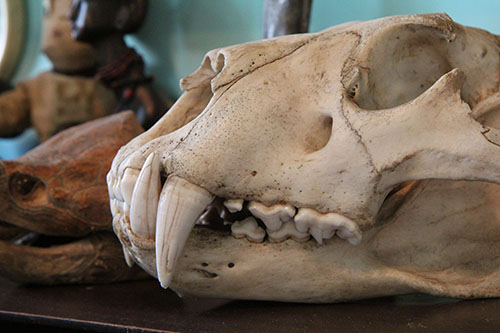 Scott and Belle never know what they will find.

Every Sunday, Scott and Belle share a booth at the flea market under the Things Found NYC banner.

They don’t own a car (Scott is not a fan of technology; although he does grudgingly use a smartphone, he refuses to touch a computer, claiming that his body chemistry messes with machines’ mechanisms) so they schlep their stuff on the subways to 77th and Columbus.

“We transport it in rolling suitcases and backpacks,” he says. “I carry the bulk, about 65 pounds, and Belle does about 35.” 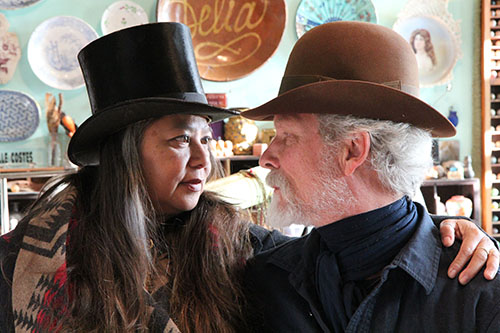 Their greatest find: each other.

Each item they sell comes with a handwritten tag that tells when it was made and where it was dug up.

Scott says that it’s nice to know that what he and Belle bring to light now will be cherished for centuries to come.

“We are historians, we’re passionate about the past,” he says. “It’s all about the sense of discovery and keeping the child in you alive.”

Adds Belle, “It’s also about getting dirty and digging up facts about the past and saving America’s history.”

Copyright 2022 by Nancy A. Ruhling